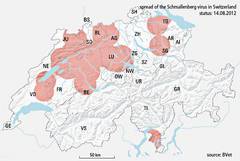 The Schmallenberg virus, an animal disease pathogens only recently identified, has already spread widely (see map) within Switzerland, as specified by the Federal Veterinary Office (BVet). The virus that causes birth defects in newborn cattle, sheep and goats, was reported in Switzerland for the first time on 20 July on two farms in the Canton Bern. The Institute of Virology and Immunoprophylaxis has since found in 34 out of 44 tested sites adult cattle, which were reported due to diarrhea or fever, either the virus itself or antibodies that are indicative of an infection. In addition, a total of 70 cases of miscarriages or abortions from 18 different cantons were examined. One calf showing malformations was tested positive for the Schmallenberg virus.

Following its discovery in November 2011 in Germany, the virus has swiftly found its way to Switzerland. The samples in which the virus was detected for the first time, came from Schmallenberg, a town in North Rhine-Westphalia. In addition to Germany and Switzerland, the Netherlands, Belgium, the UK, Italy, France, Luxembourg, Denmark and Spain are affected so far. Transmitted by mosquitoes, the Schmallenberg virus can lead to birth defects, miscarriages and stillbirths in cattle, sheep and goats.

The BVet cautioned breeders that during the mosquito season they pay special attention to acute symptoms such as decline in milk production, fever, loss of appetite and diarrhea. medical treatment or vaccination do not exist. The risk of infection of humans is currently estimated to be minimal.

Back to News & Events